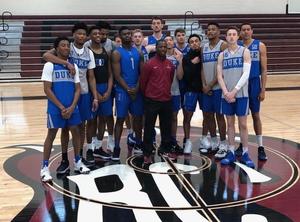 WEST COLUMBIA, SC -- The city of Columbia came out a winner as host of the first and second rounds of the men’s NCAA basketball tournament, getting rave reviews even from top seed Duke Coach Mike Krzyzewski.


And Brookland-Cayce High School played a small part in it.


The Lexington Two school’s new 43,000-square-foot arena was used as a practice site for No. 8 seed Ole Miss and No. 1 seed Duke late last week, in the days before the opening round of games Friday, March 22, at Colonial Life Arena.


In an interview with The State newspaper, Bearcats Boys Basketball coach Robert Wells said: “It was a great experience, probably one of top 10 experiences of all-time just being around sports. It was great not only for me but Brookland-Cayce High School.”


In the same interview with The State, Duke center Marques Bolden praised the arena, which opened at the beginning of 2019.


“Their high school has some amazing facilities,” Bolden told The State. “You forget you are at a high school if you don’t see the signs to remind you. The facility was great.”


While Ole Miss lost in Friday's game to Oklahoma, Duke won its first and second round matches and will advance to the Sweet 16. Virginia was the fourth team to play in Columbia.