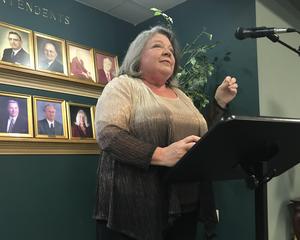 WEST COLUMBIA, S.C. -- A retired Lexington Two school teacher has been honored with one of the district’s most prestigious awards.

Lynn Summer -- who worked at Brookland-Cayce High School for more than two decades before her retirement earlier this year -- was inducted into the Heroes and Heroines Society during an October 17 reception at the District Education Center.

Summer was a health teacher and Teacher Cadet instructor at the time of her retirement, but she served in a number of other roles through the years at Brookland-Cayce High and elsewhere, among them substitute teacher, PE teacher, science lab technician, gymnastics and swim coach, and Brookland-Cayce cheerleading coach. She also worked for a time as a pharmacy technician and as an assistant at the SC Department of Parks, Recreation and Tourism.

“I am so thankful and honored that I got a chance to educate students,” Summer said, adding that being selected for the Heroes & Heroines Award by school administrators, teachers and staff members made her feel “humbled and proud.”

Today, Summer is still working with youth through The Scooter Scott Project, and she is a member of the Brookland-Cayce High School Education Foundation Advisory Committee. She also is enjoying more lake and hunt club time in retirement with husband Randy; sons Kert, Jerod and Heath and daughter-in-law Jessica; and other family and friends.

The Heroes and Heroines Society was started in the 1990-91 school year to recognize retired educators who dedicated their lives to service in the classroom, guidance or media center.  Summers is the 35th honoree chosen for induction into the society representing the “best of the best” in Lexington Two schools.

Among inductees from previous years: