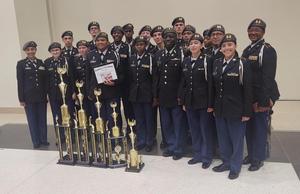 The national runner-up ranking is the best-ever finish for the Golden Talon team, which competed against the country’s best JROTC drill team programs from the Army, Navy, Air Force and Marines


The latest awards for the Lexington Two high school drill team follow a series of top finishes in state and regional events this school year. Among them:

In addition to the national runner-up finish for the team at the National High School Drill Team Championship, other finishes at the event included:


CSM Harry Ferguson, a senior Army instructor who leads Airport’s team, said he’s particularly proud of the team’s performance this year, given the challenges of COVID-19.