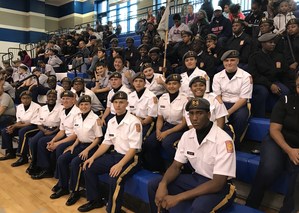 Saturday's state title was the most recent honor for the Airport squad, which has won local, state and national recognition. The team captured the League Championship for the 13th consecutive year at Lower Richland High in November and finished third in the National High School Drill Team Championships this spring in Florida.

In addition to the first place finish overall, Airport received several other honors from the 4th Brigade championship event Saturday, among them: