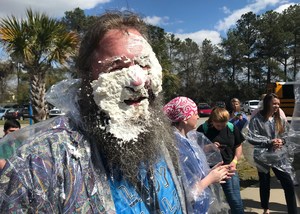 Lexington Two high school students have been showing their giving spirit, holding fundraisers that have raised thousands to help children.


Brookland-Cayce High School held its first Mini-Dance Marathon, raising more than $5,200 to support Palmetto Children’s Hospital and the Children’s Miracle Network. It was one of several such dance marathons to support the network of children’s hospitals.


“Many of our students have been in the hospital at some point, so we thought it was time to give back to the hospital," student body president Owen Sease told the Lexington Ledger. “We’ve been working hard for the past five months, and I think we’ve had a really good first year.”


And from March 2-11, Airport High School students pulled out all the stops for their annual Palmetto Health Children's Hospital Camp Kemo fundraiser. The event, in its 24th year, has raised an estimated $500,000 in that time and features a number of offbeat ways to raise money, from playing with puppies to throwing pies in faces, playing bubble soccer, smashing a junk car, holding yard sales, bake sales and silent auctions, and much more. This year's campaign brought in more than $56,000.


Both school fundraisers were featured in local media reports.