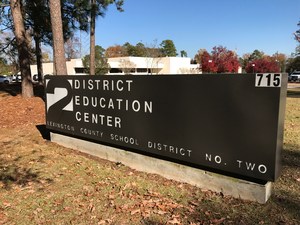 WEST COLUMBIA, SC -- Lexington Two is under contract to sell two district-owned properties along Ninth Street in West Columbia, as it moves toward future construction of its new performing arts center.

The sales contract with Still Hopes Episcopal Retirement Community includes the current District Education Center property, on 10 acres at 715 9th Street,  as well as a former performing arts center on about 2.5 acres at 824 B Avenue, fronting Ninth Street and roughly two blocks from the district office. The Lexington Two Board of Trustees approved the sale at its meeting Thursday night.

The two tracts, first advertised in January as a single package, are under contract for $4,320,000 -- the full appraisal value and asking price.

The new performing arts center, one of the projects in a $225 million school construction plan approved by voters in 2014, will be built on a yet-to-be-determined site.  The arts center will offer schools a larger venue for performances and special events, with ample seating for guests -- something many schools now lack. The district office will be housed in the arts center,  allowing for joint use of space that would otherwise be duplicated in separate facilities. Having the district office in the same building also will allow the space to be continuously occupied, even when arts center facilities are not in use.

The estimated cost of the new arts center and district office, roughly $18 million-$19 million, is expected to be covered by existing construction funds, as well as proceeds from the sale of the two properties.

Still Hopes has no immediate plans for the District Education Center site that is adjacent to its current West Columbia campus, though officials say it will allow for future expansion. The retirement community is currently undergoing a $90 million expansion and renovation.

But Still Hopes does have immediate plans for the vacant performing arts center on B Avenue. Officials say it will become a child care center for the community, with dedicated slots for Still Hopes employees, as well as a new home for Columbia Children’s Theatre, which will relocate from Richland Mall in Forest Acres.

“This center will operate as an extension of our Still Hopes’ ministry and will provide means and methods for the children, along with the retirees of the Retirement Community Campus, to interact in meaningful, planned ways, to add value and quality to the lives of both the children and the seniors,” Danny Sanford, Still Hopes’ executive director, said in a prepared statement.

“This partnership offers some great opportunities for children, including a new performing arts center for Lexington Two students, a new home for the popular Columbia Children’s Theatre and a high quality child care facility,” James said. “It’s a great use of space for our family friendly community, and we’re proud to be a part of making it happen.”