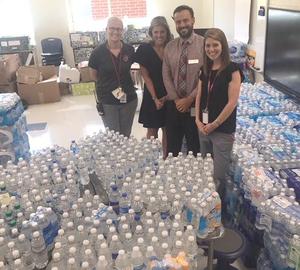 WEST COLUMBIA, S.C. -- Cayce Elementary wanted to pay it forward to help those affected by Hurricane Florence and the flooding that followed in and around the South Carolina coast.

And pay it forward they did -- in a big way.

The Cayce Cares Bottled Water Drive reached its goal of collecting more than 10,000 bottles of water over two weeks, with the drive wrapping up on Friday, October 5. Cayce Elementary is partnered with Daisy Elementary in Loris, not far from Conway, where the floods took a devastating toll. Fresh water is still a challenge for Daisy Elementary and its families. Students just returned to classes this week after several weeks out.

One of the goals of Cayce’s campaign was to "pay it forward" for the help received in Lexington County in 2015 after the devastating floods here. Several Lexington Two families received help at that time.

Cayce students weren't the only ones to donate. Other Lexington Two schools, like Riverbank Elementary and Busbee Creative Arts Academy, had drives within their schools to collect for Cayce. Several churches, including Trinity Baptist Church Cayce, joined in, as did Cayce American Legion Post 190, Cayce Department of Public Safety, Thompson Turner, Jumper Carter Sease and others.

It was an all-hands-on-deck effort from Cayce Elementary and the community to help fellow SC neighbors in need.

“It has truly been an amazing experience,” said Cayce Elementary Principal Andrew Drozdak. “I’m so proud of our students and community for showing such a generous outpouring of support for those in need.

“In Lexington Two, we believe that community involvement is imperative for each and every student’s success,” Drozdak added. “This project has truly shown my students here at Cayce the importance of that involvement.”