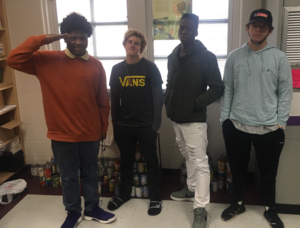 WEST COLUMBIA, SC -- Food drives are a staple at the holiday season, as area schools look for ways to help community residents in need.


This year, environmental science students at Brookland-Cayce High are taking it a step further, putting together an interactive Google map to boost access to healthy food options, from grocery stores to farmers markets, community gardens, and more.


The map project stemmed from a holiday canned food drive at Brookland-Cayce High -- and a discussion about how people struggle with hunger and healthy food options in one of the world’s wealthiest countries.


Once students started digging deeper, they were surprised to find that some communities in the Midlands are in a food desert. The USDA defines food deserts as “parts of the country vapid of fresh fruit, vegetables, and other healthful whole foods, usually found in impoverished areas. This is largely due to a lack of grocery stores, farmers’ markets, and healthy food providers.”


“Certainly, they were shocked to find out they lived in food deserts,” said James Brown, who teaches AP & CP Environmental Science at Brookland-Cayce High.  “They were able to connect how the number of fast food options surrounding them correlated to the decrease in health and increase in obesity affecting the United States. They also began to realize how immediate this issue was, because they always saw the same people walking in their communities, but never thought too deeply about it.”


Brown said students felt there was not enough available information about food choices in Columbia and the surrounding areas -- so they set out to make some of that available.  Students used Google maps and online resources to research, compile, and identify locations of fresh food options not only in the Columbia area but in parts of Lexington and Cayce, including grocery stores, farmers markets, and community gardens.  Then, they drew half-mile perimeters around each location representing the USDA's definition of the maximum walkable distance in urban environments. They used the layers to identify food desert regions that had limited or no fresh food options available within a half-mile radius.   The map includes other features as well.


Brown said it became clear to students that entire sections of Columbia are underserved, and they concluded parts of the city that need the most support often seem to receive the least.


Students want to share their efforts with the public, Brown said, and so they have been contacting organizations that have worked to address food deserts in the past, hoping they will help publicize the students’ map.


Brown said the project helped him gain a deeper understanding about the social dynamics of Columbia, Cayce, and Lexington, which will allow him to develop lessons based on local issues.

“Because this issue resonated with them, we were able to connect to the larger social, political, and environmental context,” Brown said.   “I was able to learn much more about my students’ lives as they began to open up about their experiences with hunger in their communities or within their own homes.

"This brought a level of empathy and immediacy to the environmental/social issues we tackle every day in the classroom.”


SEE IT: The link to the interactive map can be found here: https://drive.google.com/open?id=1FpPOA3uz_rbqUiPY2nwQn8PEROWuGaf7&usp=sharing